So as the title suggests I have a show and the day of reckoning is almost upon us as it's this coming Wednesday November the 28th at the Devon Branch of Uncommon Ground. I am first on at 8pm sharp, Savanna and David Anthony Marshall are also playing. This is my first show in a long time, I decided to break out of my shell earlier this year in July and start playing open mic nights to slowly befriend the stage again. We became tentative bed fellows, and I strangely enough enjoyed debuting some of the material from my last three EP's Songs You Probably Won't Like, Songs You Can Live Without and Songs Lost In The Fire (available @ http://stevenprobinson.bandcamp.com/). The crescendo to my efforts is this first break out solo show this coming Wednesday so I really appreciate anyone that can swing by and lend their support.

Join us for the musical odyssey that is the first ever Ground Up Showcase @ Uncommon Ground!

I say released, "released" in it's loosest term, ie available over at Bandcamp and added to the music page of stevenprobinson.co.uk. And as I openly support music kleptomania, it's even available for download for free here in zipped up format.

It is a raggy doll collection of songs. Christmas Tree is my first crack at a christmas song, an ode to an artificial christmas tree. Factory Settings is a brand new song I've already put out there, probably the best thing on here. Half Illuminated is a digital treatment to a song I recorded on the analog tascam a few months ago. Sweet Amy is an old song but I never quite got it right even though I actually recorded at Uptown Recording Studio, so this is my third and final attempt - I threw some reverb on the vocals to stop them sounding so flat. Weeping Willows I'm not sure how to describe, it's an instrumental I had in mind. I find it quite chill, your dog may not agree!

Speaking of dogs, Chase is the star of the album cover, Chase and fire that is! 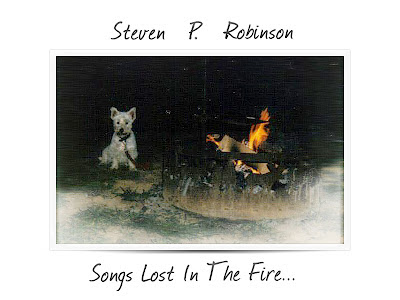 So the kind folk over at FatCat Records who used to host demo's they liked on their own site, have done the old digital re-shuffle and moved everything over to SoundCloud. They hosted from me I Couldn't Offend You If I Tried, Amputations and Dead As Stone, and in this re-shuffle two out of the three fell by the wayside but they still host probably the best of the three 'I Couldn't Offend You If I Tried' at the below url. The other ones can still be unearthed on my music page www.stevenprobinson.co.uk/music.html

The Demo Archive http://soundcloud.com/fatcat-demo
Posted by Unknown at 11:36 AM 0 comments

My musical comings and goings...

Though my blog doesn't attest to it I have been fairly busy over the past couple of months music wise. Firstly in a moment of grand nostalgia while shopping with my good friend Neil Woodman who was visiting the windy city at the time, we came upon a Tascam MK II analog 4-track, the same model I first bought 17 years ago. It was my first ever recording purchase and I cut my teeth on it for a couple of years before moving on. So retro as it may be, and impractical too, I have regressed to tape at least for initial demos. The first of which is a new song called 'Half Illuminated' which I have already begun to give the digital treatment to so watch this space for that version.

As a lover of motion pictures, the next natural step for my music was to add video. It began tentatively enough with a quickly edited video for 'Set To Slow You Down' where people look to be having far too much to the sound of my tunes. Then overwhelmed with festive cheer I created my very first Christmas tune, an ode to a Christmas Tree (an artificial one at that). I recorded the song and it can be found here , but I accompanied it with video, the Mise en scène involving a Christmas Tree naturally, myself and an impromptu appearance from Chase.

Set To Slow You Down

Santa was pretty good to me despite myself and I now have a Studio Projects C1 microphone. It really is something else and may even make me sound not too shabby! So expect some recordings soon with this new weapon in my armory.

I have begun work on a new EP which I think is going to be a raggy doll collection of songs so I have given it the title 'Songs Lost In The Fire'. It will include 'Christmas Tree', probably both versions of 'Half Illuminated' (if I manage to complete the digital version and make it stand out from it's analog twin), a new song called 'Factory Settings', an instrumental called 'Weeping Willows' and then either I'll re-visit an old track called 'Sweet Amy' or 'Out of My Tree'. I doubt I can do the latter because that'll be too many tree references for one record, sort of why Mother Natures Son and Child of Nature both couldn't be bed fellows on the White Album! I also have a cover version up my sleeve but I don't want to give too much away about that yet. At my pace I figure 6-8 weeks to wrap this up, but the EP cover is already done so that's pushing me along!

Finally also got round to updating http://www.stevenprobinson.co.uk with the new sounds, videos and a couple of old photos to boot.