It's been a long time coming but I've given my music site the lick of paint it so richly deserves over at www.stevenprobinson.co.uk and pretty much warts and all included most of my discography. I'll continue to look in the vault for old ditties that haven't seen the light of day in a while and update it with new songs.

For prosperity's sake the old design can be found here in an archived folder so if you want to take a trip down memory lane to 2004 when left aligned 800x600 resolution flash sites were all the rage then by all means be my guest! I'm not ashamed, it has it's place in my heart. :)
Posted by Unknown at 7:12 PM 0 comments

So not that it was a completely unproductive year because it wasn't but last year I did a horrible job of keeping with my intention of recording a new song every month. I was coming out of an unrivalled musical lethargy and found it difficult to kickstart my groove! I recorded a couple of new songs though that I kind of like which can be found on my sites media page and others that I've already cast aside, my forgotten children!

This year without the shackles of such lofty ambitions on my shoulders given, I have kept up good pace regardless and recorded two songs. A brand new song called Set To Slow You Down and prior to that to test out my new recording set-up a different version of Nothing Ever Lasts.

I think I am getting a handle on my sound so hopefully they'll be more to follow shortly.
Posted by Unknown at 6:33 PM 0 comments

....God Created Adam & Steve! Some things that begin spontaneously often end that way and Adam & Steve's brief flirtation with the limelight is now unfortunately on hiatus while Adam is trekking the globe but the bands spirit lives on separated simply by a little land and sea! Over a time period under two months myself the Steve in this equation got together with a drummer the Adam in question to take my folky jams electric, rehearse, play our first show and record an EP.

One day perhaps we'll get a chance to relive the sights, sounds and smells we had together but until that moment the little of a legacy we left is in the below two links and crudely composed artwork! 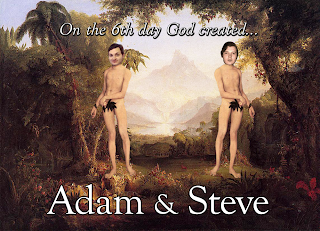