A much belated update....and new EPs on the way!

So I came out of the woodwork to do two shows, my first solo shows in Chicago actually. About June of 2012 I got the bee in my bonnet to at least explore the possibility of embracing the stage again. I gamely went out into the Chicago open mic circuit and after paying my dues was offered a show at Uncommon Ground in November of last year playing on the same bill as David Anthony Marshall and Savanna as part of a songwriting Showcase. A rousing crowd of well wishers meant my first show back in a long time was like putting on an old comfortable sweater! It didn't completely kill my spirits and I went back for more when asked to fill in a support slot for Greater Alexander in Match of this year. Gigs since have been less forthcoming but I have also retreated slightly back into my musical cocoon, so need to spend the latter part of this year searching out venues and collaborators for more live tom foolery!

Below is a picture from the November show, I also uploaded a couple further photos to stevenprobinson.co.uk. 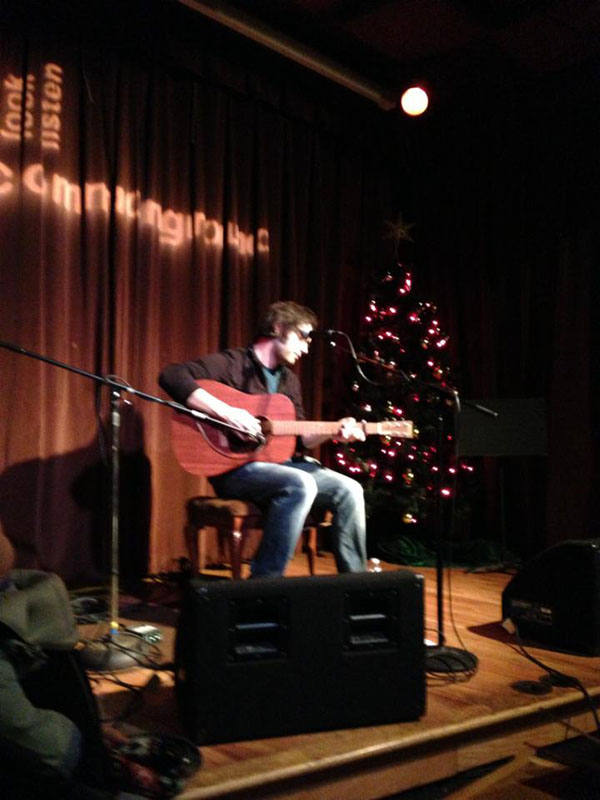 If motion pictures are more your thing I did upload a video to youtube of 'Factory Settings' although it's not my finest hour I don't think. Also you can view my profile up on the Uncommon Ground website.

So rather bored of my own songs, I toyed with the idea of ruining other peoples songs instead and this led me to the idea of doing a covers EP. Much procrastination has followed but I have begun work and have three covers complete and another I'm fairly down the line on. However selecting songs has proven difficult because there is such a plethora of songs I wish I had written. I'm resisting being too obvious in my choices, and I'm also trying to find songs I can offer my own spin on. So my selection headaches has led me to make this a two part project and finish off volume#1 of covers but pick straight up and begin volume#2, both expected to be about five songs in total. The title to follow my previous 'Song..' naming convention is 'Songs Borrowed Vol#1 and Vol#2'.

I already have a sleeve idea for this one so that should speed it along! I hope to have the first installment out within the next two weeks all being well.

(as yet untitled) EP4

I uploaded to bandcamp a new song called 'To Be Free' and this will be the opening track of a yet untitled new EP. I tentatively call it EP4 because I think it's part of the same musical journey as the three previous EP's I released over the last 2 years. I have three songs written so some stuff still to work out with this one but I'm optimistic I can wrap up something within the next couple of months.

If I get to the stage where I have two volumes of cover EP's and one original song EP under my belt but my musical restlessness is not quite put to bed, I am contemplating an instrumental EP called 'Colour Experiments' where each track is named after a different color (and yes I will spell this the British way). Although I definitely need to purchase a bontempi organ if I am going to do 'Brown', nothing quite echoes the sound of Brown quite like a bontempi!


Lastly and probably least but I uploaded an old song 'Set To Slow You Down' to a new site called Demo Rain. The site looks pretty cool though, some good music on there, check it out.